#OnThisDay 1739 Christian Davies died. Davies, a Dublin woman, joined the British Army to find her husband who had been press ganged into the service. Initially she joined Captain Tichborne’s company of foot under the name Christopher Welch and as an infantryman, she fought at the Battle of Landen (where Patrick Sarsfield was mortally wounded) July 1693. During the battle she was wounded and captured by the French, but in 1694 she was exchanged. Her sex was still a mystery to both armies.

She was discharged for killing a sergeant in a fight over a woman but with her mission of finding her husband still incomplete, she rejoined the 2nd Royal North British Dragoons (The Royal Scots Greys and fought until the Peace of Ryswick, ending the Nine Years’ War.

She reenlisted with the Scot’s Greys at the outbreak of the War of Spanish Succession in 1701, where she was known as the “pretty/handsome dragoon”. During that war she fought at the Battle of Schellenburg, was shot in the thigh but wouldn’t let that stop her fighting in the next battle in a few months’ time at the Battle of Blenheim.

It was here that after thirteen years she found her husband, in the arms of a Dutch woman! She dumped him and took up with another Scot’s Dragoon, although she and her ex-husband got on well and he kept her secret.

She stayed in the Army until 1706 at the Battle of Ramillies where she was severely wounded. It was then that her secret got out. Her pay was continued until she was discharged but was allowed to become a Sutleress. The Scots Greys’ Officers bought her a new wardrobe when leaving.

She remarried two more times and spent the rest of her life in Ireland and Britain and passed away in the Royal Hospital Chelsea. 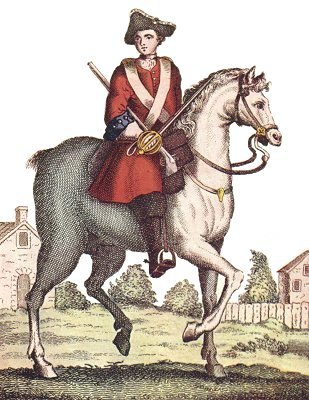