#OnThisDay 1798 United Irishmen scored one last win over the Crown Forces in Wexford, when they lured a 200 man cavalry unit called The Ancient Britons (from North Wales) into a three sided ambush site in Ballyellis.

The cavalry unit had been in pursuit of the 1000 strong rebel column and had made some attacks on stragglers and foragers in the previous days. They eventually caught up with the main column and sped up to attack. However, fortunately for the column, they saw the Crown forces first and made hasty arrangements for an ambush.

‘The ambush site was on a bend in the road bordered by high, thick ditches of crab and thorn on both sides, a high wall belonging to an old deer park and a dyke five feet deep. The road was also blocked with wagons and a small force placed on the roadway to lure the cavalry into the trap. Upon spotting the small force standing on the road, the pursuing British quickened their pace and charged forwards, assuming that they were facing only the rear-guard of the fleeing column. The government troops fell for the ruse and charged the apparent rear-guard of the fleeing column only to be met with rebel fire from three sides. The rear-ranks quickly fled with a few more soldiers escaping by jumping their mounts over the ditch but the rebels organised a relentless pursuit of the soldiers who were tracked and killed through the adjoining fields. In his memoirs, General Holt talks of the black trumpeter Anthony King being ‘most tenacious at life and taking more piking than five white men’ before he died. A pike man severed his ears to take his gold earrings. He also tells of a boy piking a militia and not being able to remove the pike.’

In the ambush and subsequent pursuit the military, the Ancient Britons, lost over sixty troops (including a French émigré) and two officers were killed. There were no rebel casualties.” 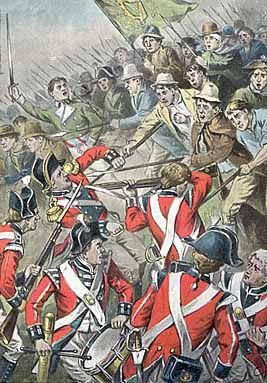