#OnThisDay 1798 At the Battle of Vinegar Hill, the United Irishmen rebels were defeated by the Crown forces. The UI camp was surrounded and pounded by Crown artillery. Although several massed pike charges were formed, they could not break the Crown’s lines. Eventually after some hours of fighting and having run out of gun powder the United Irishmen began to run.
Nearly a thousand were killed & though two large rebel columns escaped (through Needham’s Gap- The General who was too slow to close the ring around the rebels), this loss changed the Rebellion as the UI were less likely to face Crown armies in the field. The United Irishmen moved to large raids and guerrilla type warfare. It spelled the end of the Rebellion in Wexford as it had been fought heretofore.
In Enniscorthy, United Irishmen positions were also overran. Claims of rape, murder, reprisals, house burnings etc by the Crown forces were very common. 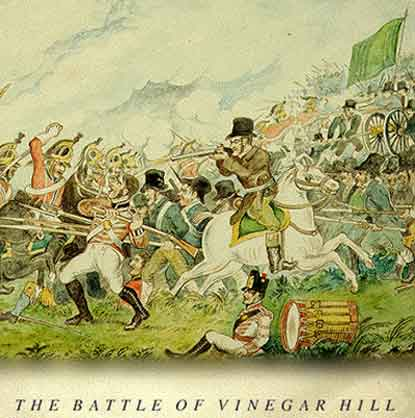