#OnThisDay 1691 Williamite under Ginkel & Jacobite forces commanded by St Ruth met at the Battle of Aughrim, Ireland’s bloodiest battle. Initially the Jacobites fared well, locating themselves in a great defensive position that gave the Williamites little cover but the tide turned when the fire on the Jacobite left flank quietened, some Williamite cavalry and infantry crossed the bridge& St Ruth was decapitated by a cannonball (having just declared that “the day was Our’s“). The Williamites poured in on this flank and began rolling up the Jacobite infantry. Luttrell’s Horse on the Jacobite left flank fled, further worsening the situation and despite Sarsfield’s attempts to fight (who had crossed from the Jacobite right flank) a withdrawal, he could not save the day. Thousands of bodies littered the battlefield, so much so that it was said that they looked like sheep on the hill. 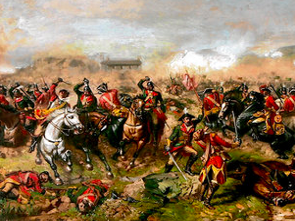