#OnThisDay 1876 Myles Keogh from Leighlinbridge, Carlow was one of 268 soldiers of Custer’s 7th Cavalry to die fighting Sioux & Cheyenne warriors at the famous Battle of Little Bighorn in Montana.  Keogh was the most senior captain present of the five companies.

Keogh had previously served in the Papal Service defending Papal states from Italian Nationalists in the process of unification. He was awarded two medals for valour during the conflict- the Pro Petri Sede and Ordine di San Gregorio. However, the Papal army surrendered and with little fighting going on he surrendered his commission with the Papal army in 1862.

With the American Civil War raging, Secretary of State William H. Seward began seeking experienced European officers to serve the Union, and called upon a number of prominent clerics to assist in his endeavour. John Hughes, Archbishop of New York, travelled to Italy to recruit veterans of the Papal War, and met with Keogh and his comrades. Keogh then left for the States.

Keogh kept his rank of Captain and fought in many famous battles of the American Civil War, like Gettysburg, Port Republic, Second Bull Run, Antietam. It was at the early stages of Port Republic on June 8 1862 that Keogh and his men almost captured Stonewall Jackson. Brigadier General John Buford, the tough, veteran horse soldier found his Irish aides just the type of officers he was looking for, commending them as “dashing, gallant and daring soldiers.” Army of the Potomac commander George McClellan was equally impressed, describing Keogh as “a most gentlemanlike man, of soldierly appearance,” whose “record had been remarkable for the short time he had been in the army.” By the end of the war, 25 year old Keogh was a lieutenant colonel.

After the Civil War ended, Keogh stayed in the Army but was put back down to Captain. He joined the new 7th Cavalry led by the ‘Boy General’ George Custer. He fought in the Indian Wars. At the Battle of Little Bighorn, Keogh was the only Irish officer & most senior captain of the five companies. He died in a “last stand” of his own, surrounded by the men of Company I. Keogh’s body was found at the centre of a group of troopers that included his two sergeants, company trumpeter and guidon bearer. The slain officer was stripped but not mutilated, perhaps because of the “medicine” the Indians saw in the Agnus Dei (“Lamb of God”) he wore on a chain about his neck or because “many of Sitting Bull’s warriors” were Catholic. Keogh’s left knee had been shattered by a bullet that corresponded to a wound through the chest and flank of his horse, indicating that horse and rider may have fallen together prior to the last rally. His horse Comanche was the ‘Lone Survivor’ of the battle.

136 of the soldiers in the 7th Cavalry were Irish-born, over 30 Irishmen also died that day too. 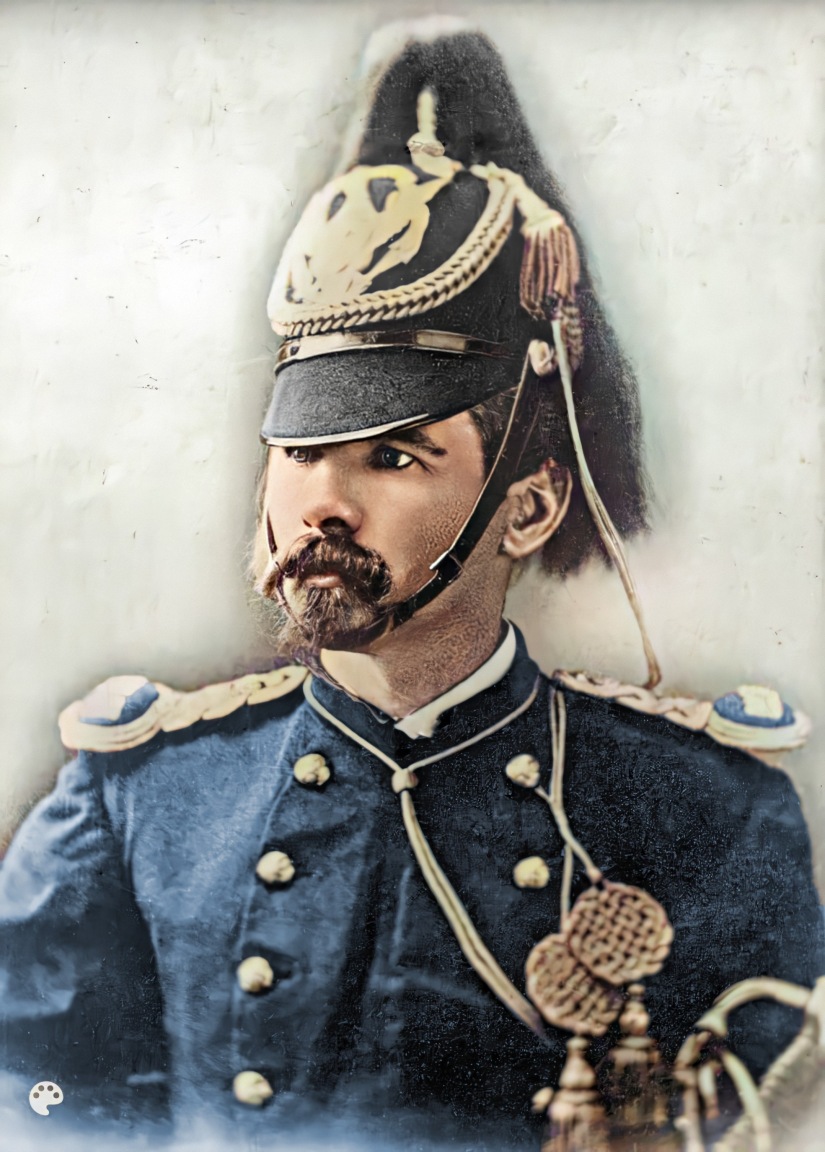